Want to sell your business fast… and without hefty broker fees? 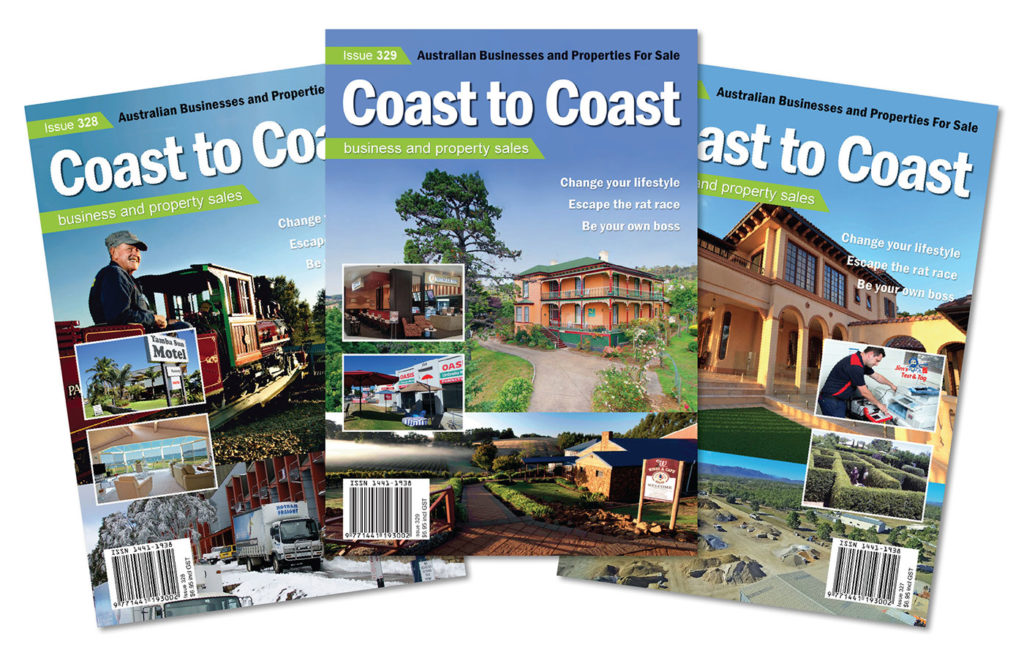 Call One of Our Friendly Consultants on

…or fill in the form below, and we’ll contact you within the next business day:

Handling of Confidentiality Agreements
Dedicated Business Broker handling buyers and the buying process, over the phone, via emails, and Skype calls
Non-exclusive agreement

Where We Advertise Your Business

What Our Clients Have To Say About Us…

Thank you to all at coast to coast for the help in selling our Tourist park (Freehold & business). It was on the market for a long time with real estate agents to no avail – selling within months with Coast to coast. We found support within the team from initially advertising both online & in the magazine. Calling us each time we had someone interested & collecting feedback gave us confidence to hang in resulting in our sale. The girls seem to take a personal interest, portray a professional attitude and produced a successful result. We would certainly recommend these guys. Thanks again – & keep up the good work.

I owned a café in a small town that was struggling to stay afloat. After months of spending thousands in my local newspaper to try to sell my business – I realised the same people were seeing it for sale week after week, month after month so I decided to look for something that took my advertising dollar further afield. I discovered Coast to Coast in my local newsagency, called them the next day and had an advertising campaign worked out in a matter of minutes. For the first time, my business was being seen by interstate buyers and that is exactly who ended up buying it. I never knew Coast to Coast existed so now I tell everyone about it, so much so, I’m about to advertise one of my properties with them. It saved me not only money but my sanity as well! Thanks team, what a great product!

I advertised and sold my outback hotel with Coast to Coast as I knew my buyer wouldn’t be a local and I was right. I was inundated with enquiries and I even got an interested buyer from Italy! Would recommend them to anyone who was wanting to sell privately.

Thank you to the overwhelming response in your buyer match service, we sold within a couple of weeks of having the advertisement in your magazine. We even had a second offer who wanted to buy if the sale fell through. Exceptional results for just one listing with Coast to Coast.

I wish to personally congratulate you on the most successful advertising medium I have ever used. This I do not say lightly as I measure my advertising very diligently. As an Agent who puts together packages for small business people to sell their own business without commission, I am looking for them to be successful with little trouble. My last client I directed to Coast to Coast was Murphy’s Town Pub, within the first 48 hours of the last edition of the year being on the shelves for purchase I received 18 calls in relation to the business. Total number of calls 38 in a week “WOW” that is value for money. The numerous small clients I have directed to this company have all registered the best responses and from all States of Australia – far ahead of the usual considered medium’s. The small businesses I direct to this advertising range from Hotels, Smash Repairs, Gym’s, Butchers, acreage in fact any small operation that wish to sell themselves – all of them registering success in response. Congratulations Coast to Coast.

Very grateful to Coast to Coast for selling my Garbage Truck, I had more than 10 genuine enquiries and sold it to the first one that contacted me.

-
Have A Question?
Call One of Our Friendly Consultants on
1300 793 792
…or fill in the form below, and we”ll contact you within the next business day: